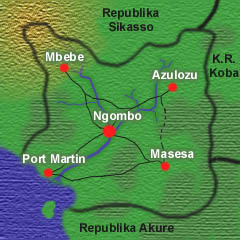 What you need to know

The Republic of Lokombe - a small country on the west coast of Africa. After another coup by the military and secret police, a new ruler, called the governor, comes to power - that's right, it's you!

However, before you sit down in your cheetah-upholstered armchair, let me take a look at some small details. Well, Russia and the United States are looking for opportunities in this region to extend their economic and military tentacles.

Lokombe's neighbors also have their business here - Sikasso aims to recapture what they say is their southern region with its capital Mbebe, the Communist Republic of Koba will do whatever it takes to gain access to ocean, and the Republic of Akure would prefer your country to stay under-developed. And that's just for starters.

What you should know

One cannot forget that in the east of the country there are partisans, who want to overthrow the current government, military spend every free moment collecting bribes from smugglers and plotting another coup, and secret police limits their activities only to plotting.

And of course there are farmers producing the country's main livelihood, coffee (and we all know what happens to people when they run out of coffee). Above them are industrialists aiming to bring the country into the 21st century and tribal elders, who prefer to keep everything they way it was so far. Phew...

Well, this is not the end of the list, because we cannot forget about the UN, which evaluates several parameters of each country in a constantly updated ranking. If they find you are not coping with their guidance, they will surely find a way to remove you from Lokombe.

If you still want to take up this honorable office and you have aspirin ready, do come in. The goal of the game is very simple - with no internal rebellion or external conflict, stay in power for 52 weeks, or as they say in France, one year.